I used to keep bees, and am well used to having them in the garden.  They are often a favourite subject on my daily photo foraging expeditions around the property, even though I have developed a good eye for other interesting or unusual creatures. You may recall in January I posted a photo of a bee species that I had not seen before in the seven years I have lived with this garden.  It was a Blue Banded Bee, or Amegillia cingulata, an Australian native bee with a very distinctive appearance –  it is a bit plumper than the well known honey bee and instead of yellow stripes, it has beautiful turquoise ones, the number of which indicates the gender.  This one had four, so that makes it a female.

I have seen a few since then, but they are not at all common, despite this place being flower filled and overgrown through the summer.

Two days ago I saw this little bee resting on the top of a water reed near the lake, another one I had never seen before and had no idea of its identity.  It was that colour – navy blue and white, and quite small.  Initially when I saw it (without my glasses) I though it was the remains of a dragonfly or another insect that had been caught or killed by something.  It was only when I looked closer and through the lens I realised it was a bee and alive. 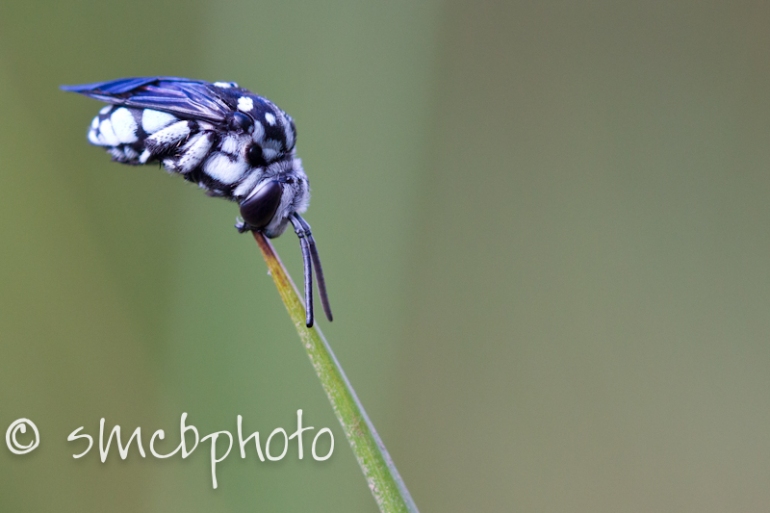 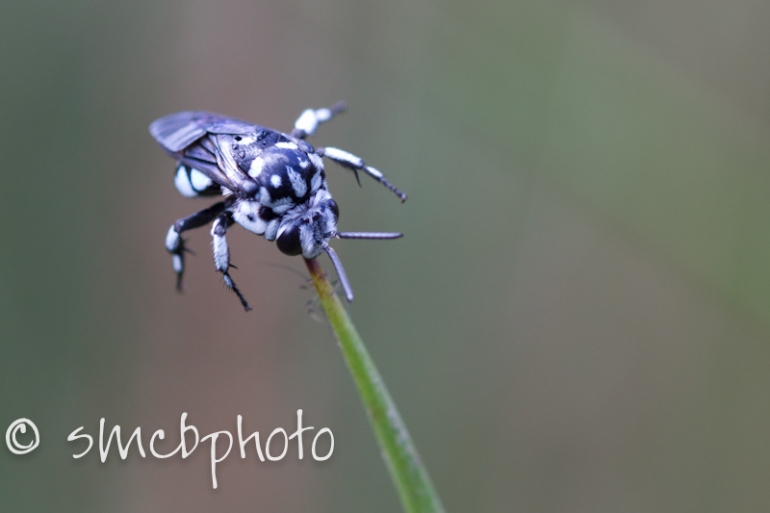 I went searching online to see if I could find out what it was, thinking it might be a Cuckoo Bee, and this was later confirmed by a contact at the Melbourne Museum.  It is a native bee with the very grand name of Thyreus caeruleopunctatus, but it does not collect pollen like most bees.  It is called a cuckoo bee because it steals the pollen of other bees by entering their nest, eating the other bee’s egg and then laying her own egg on the pollen mass – a bit like the Cuckoo bird which lays its eggs in another bird’s nest.  Interestingly, the only bee on which this bee is parasitic is the Banded Blue Bee mentioned above – perhaps that is why one does not see very many of them.  I was invited to have this photo added to an online data base of Australian pollinators, and was delighted to accept.  You can see now my image again here, which is a bit of a thrill, and find out more about this beautiful but sneaky bee on the Australian Pollinators website.