Recently I read a lovely story of the rescue of a Blue Banded Bee, with great photographs by Mark Berkley, an Australian photographer who loves macro as much as I do, so I thought to share my own experience in rescuing tiny creatures.  About two weeks ago I lit my slow combustion heater as it was really cold that night, and added several red gum logs to the wood basket for the purpose.  I did not burn it all, so one log has been sitting on the hearth ever since…..it must have been full of ladybirds as I have been finding them huddled in corners on my windows ever since.  I do not know the life cycle of these insects beyond knowing that they go through several stages before they become adult, or whether these insects had hatched in a crevice of the wood (doubtful), or the cold had made them decided it was time to shelter for the winter.  Some appeared alive and moving, others were quite stationary and looked dead, but they had obviously been able to fly towards the light and settle once they had emerged from the wood.  I have been collecting them and taking them outside, releasing them onto a pot of moss where a light sprinkle of water revived most of them so they could fly away.  I must have saved at least 30 of them, and of course, there were photographs too! 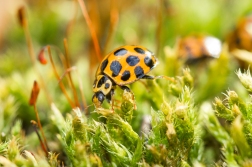